Yuyosoft games include arcade, strategy, role-playing, puzzles and animated action games! Many of these games are based on a completely original concept that you won’t find in any other mobile game.
Today, so many games look alike, with dark textures, apocalyptic lighting, fancy 3D graphics and physics-based animation. In the case of Yuyosoft, however, we are focused on 2D, colorful cartoon graphics, with simple and addictive gameplay. Interestingly, 2D animation also happens to be a current trend in televised adult animation programs.
Yuyosoft games are designed and built by a small, experienced team split between Vancouver and Tokyo. Our games are in English, and in many cases, localized into Japanese and Korean as well. Most games are completely free to download and play. Where available, in-app purchases unlock higher levels.
Whether you are on a mobile phone or tablet, and whether it runs Android or iOS, you can download our games through the App Store and Google Play Store links on this page. We invite you to explore all of our games on this page! 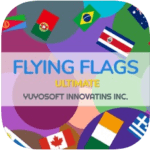 Improve your reflexes while learning the flags of countries around the world. 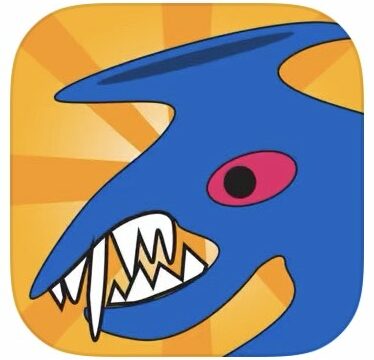 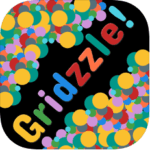 A new approach to jigsaw puzzles! You can peek at the solution, but it costs you points each time. Travel the world in search of designated spies and secret objects. Hints and a dynamic route map are provided. 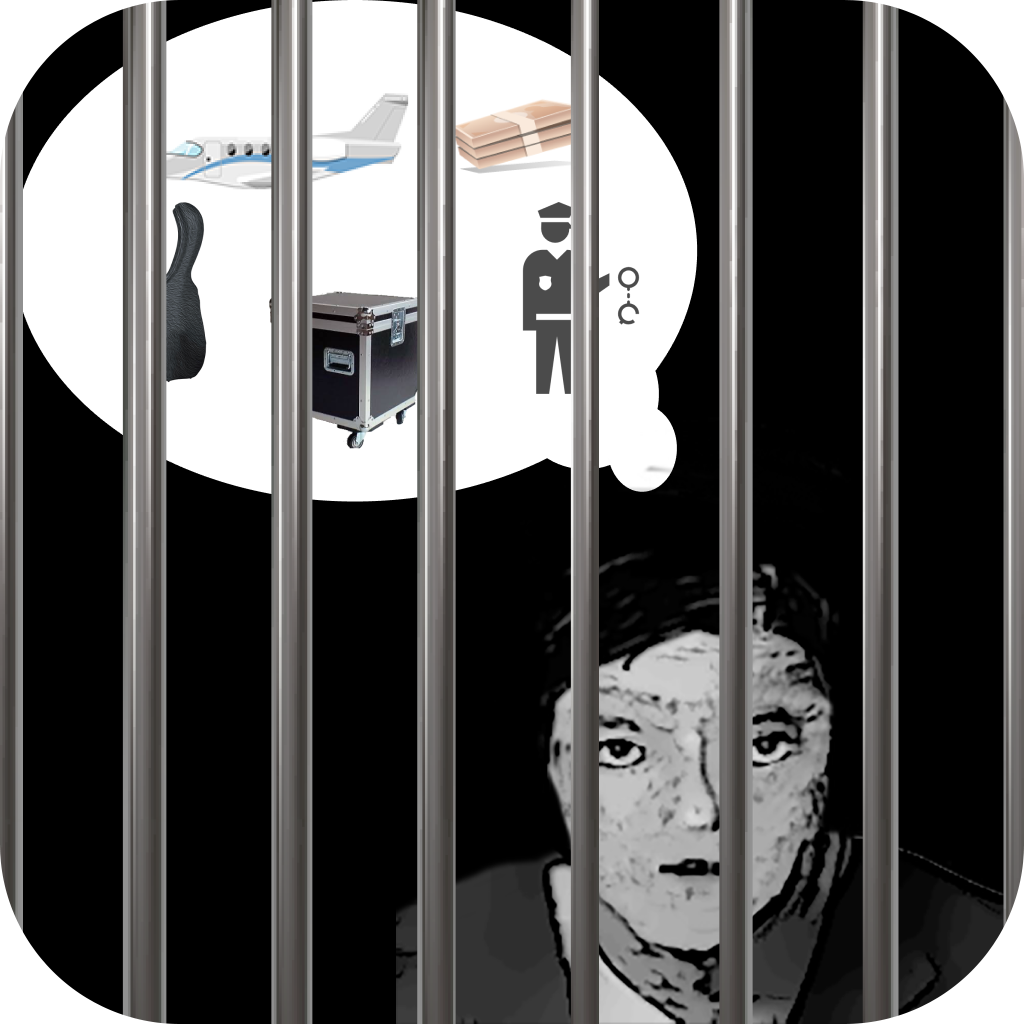 Musical Escape is a musical game. If you are a beginner, it trains your ear to recognize a specific orchestral instrument while listening to a short musical piece. 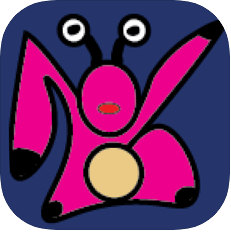 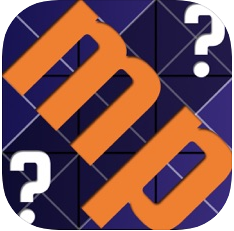 Can you guess what the scrambled picture is? That’s the basis of this highly unusual game. 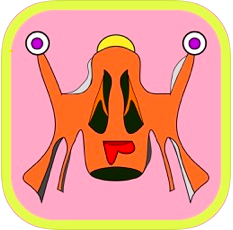 Spooked by the loud voices of humans, the aliens scatter and tumble, using their color camouflage in a desperate attempt to blend into their surroundings. 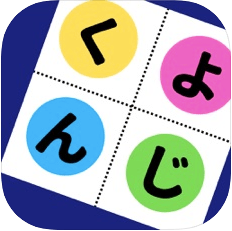 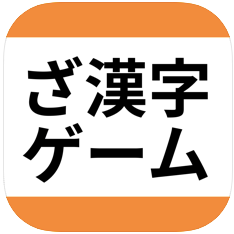 This is the best and most comprehensive among the Flying Flags games on the App Store. This unusual arcade game concept was developed in Vancouver, BC, Canada.

There is a carefully designed learning process at the core of the game.
You will recognize, and retain in your memory, the national flags of almost all the countries in the world through repetition, disambiguation and progressive difficulty. And this all happens within the challenging and enjoyable context of an action game.
Tap on the flag that matches the country name at the bottom of the screen while it is visible. Avoid UFOs, as they take away points. So does getting a flag wrong. To move up to the next level, recognize correctly all ten flags at the current level. Do this quickly to receive Time Bonus points. Between levels, there is a mini-game for more bonus points. This reinforces your knowledge of all the flags you have encountered up to that point.

The first three levels are free. Expand your Flying Flags Ultimate through an in-app purchase, to obtain 17 extra levels and exam-like mini-games that reinforce what you have learned. Try to set the high score, as you learn all 190 flags, 20 levels!

Watching international sporting events on TV will never be the same again, once you know the flags of all the countries! 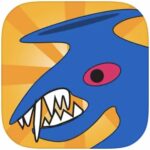 The earth is being overrun by all kinds of strange aliens. In this exciting shooting arcade game, use ten different types of guns, each more powerful than the last, to shoot energy spheres at 60 types of aliens. Be careful to aim at only the ones targeted in your current mission.
Each time one of your energy spheres hits an alien, the creature morphs to the next stage in its evolutionary cycle. However, hit a fully evolved alien and it will fall back a stage in its evolution.
When hit, aliens not designated as targets will cause one of your target aliens to slip back a stage, as a penalty, so be careful.
If you convert all the target aliens to their highest evolutionary stage before the timer runs out, you have completed that level, and you will receive a component that goes into the assembly of your next gun. There are ten components for each gun, and as you receive each component, you will see the gun start to take shape.
To fire a gun, press and hold until its charge (shown at the top of the screen) is at the level you want. With a full charge, the energy sphere is released at its maximum speed, whereas with just a tap, the energy sphere moves quite slowly.
In each mission, the aliens may vary, but for that mission and the others at that level, the aliens will move in a characteristic way.
The first 20 missions can be played without limit for free. An in-app purchase gets you the full game, with all ten guns, 100 missions and 60 aliens. It’s up to you to save the earth, and send them all back to their respective planets.

Cute animals surround you in this game, testing your recognition and memory. This is a completely original game concept, developed in beautiful Vancouver, BC, Canada.

Find bubbles of the same color containing the target set of three animals, and press that color at the bottom of the screen to score a point. But beware, a wrong answer causes one point to be subtracted, as a penalty! Score ten points before the timer runs out, and you will be promoted to the next level.
Each level has its own visual obstacles that block the bubbles, often forcing you to make informed guesses with limited information, in order to complete the round within the time limit.

There are three fully working levels, but you can unlock all 30 levels through an in-app purchase. 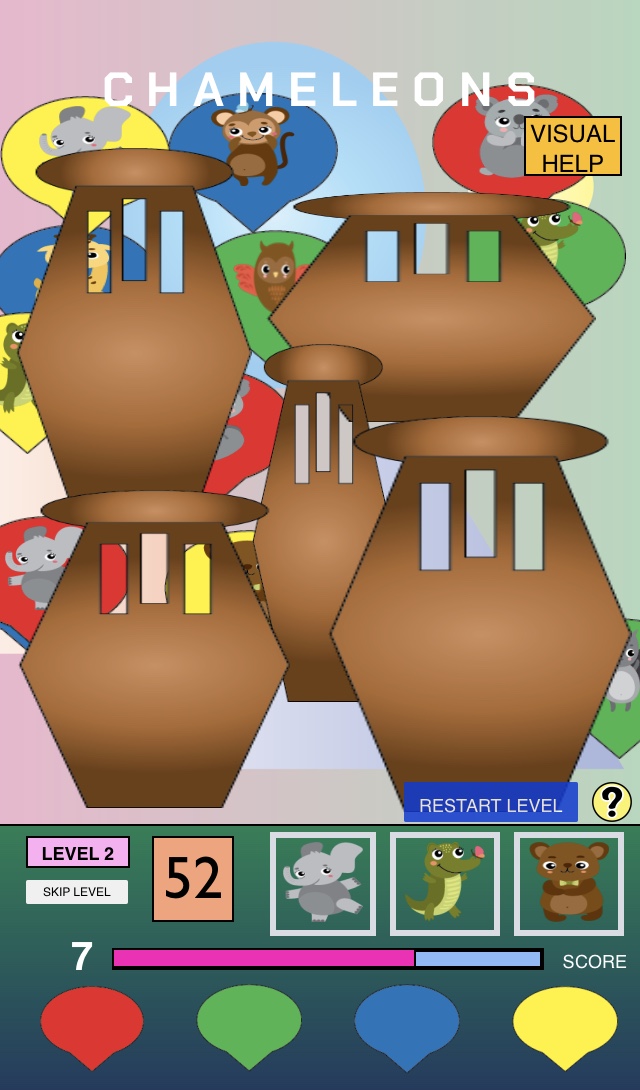 A fun and different approach to jigsaw puzzles for your phone or tablet, developed by puzzle lovers in Vancouver, Canada

Drag and drop pieces to complete images, just like a jigsaw puzzle! You have a limited number of turns so move your pieces wisely.

If pieces overlap within a cell, the cell border turns red. If you need a hint, hit the “Check Answer” button, but note that it will cost you 5 turns.

Many different, visually stunning pictures, with randomized pieces, will entertain you endlessly. Gridzzle on your phone anywhere, any time. 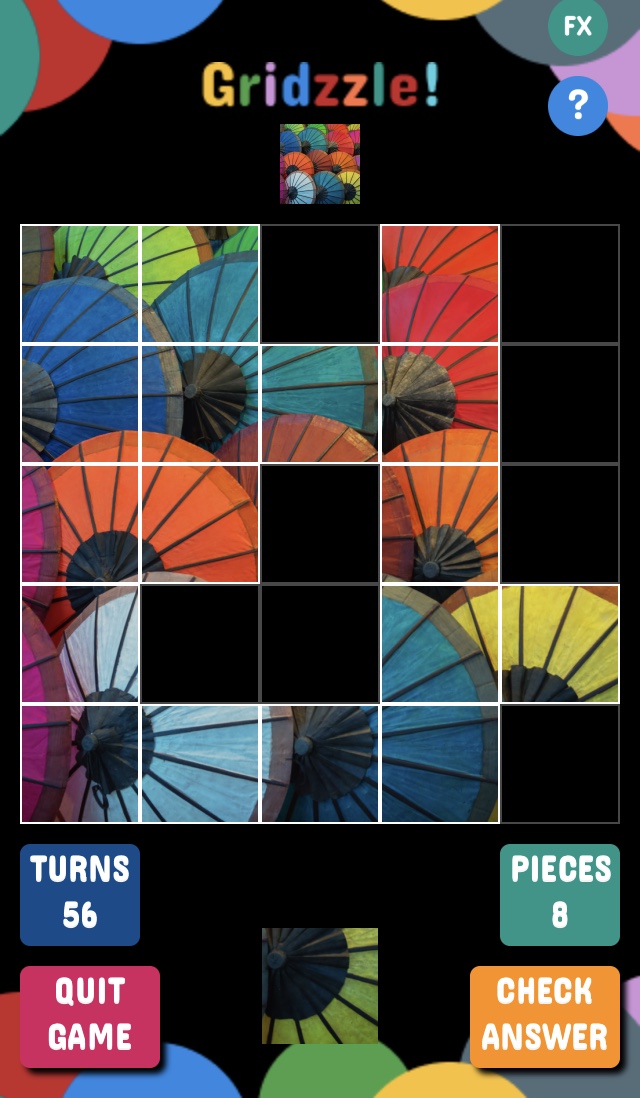 Global Spy is an innovative adventure game, developed in Vancouver, Canada. There are no other games like this anywhere.

You have a mission: find the spies and secret items before your time runs out!

Your targets are shown at the lower left of the screen. Click on the city name on the right of the screen to move there.
Each city you visit may have a spy and/or secret. When you find your spy or secret, click on it to capture it.
The target now appears dimmed, and the next target is revealed. To view all targets for the current level, press the Level Help button. To finish on time, pay attention to Spy Intelligence, and use the Map to find the best routes.

Spies sometimes move around between the cities, but secret items are always at a fixed location for a given mission. At higher levels, some spies may evade capture by escaping to a nearby city, and some items may require a key to unlock them. Keys are just like secret items–you have to look for them. Each level has from 2 to 5 spies, and a corresponding number of secret items, plus a time limit.

The first three levels are free, but an in-app purchase gets you a Super Spy Pack with 27 more levels, new spies, new secrets and new challenges. 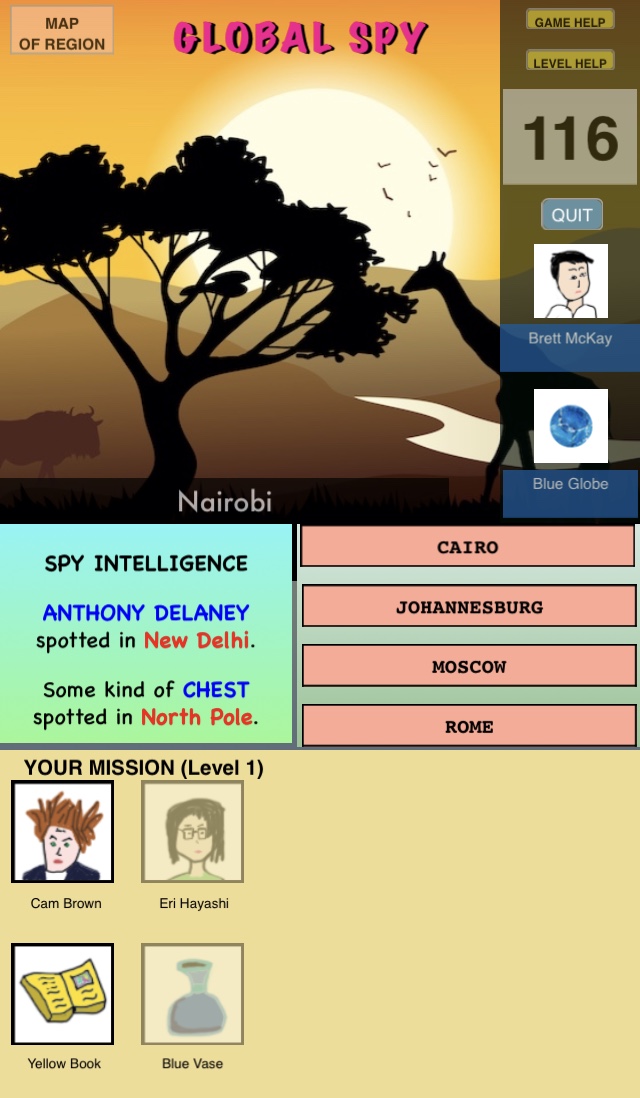 Mr. Smith needs to get away…fast! Can you help him leave the country in a private jet?

Musical Escape is a musical game. If you are a beginner, it trains your ear to recognize a specific orchestral instrument while listening to a short musical piece.

If you already have a good working knowledge of music, try the “hard” level, where it is more difficult to recognize when your target instrument is playing. 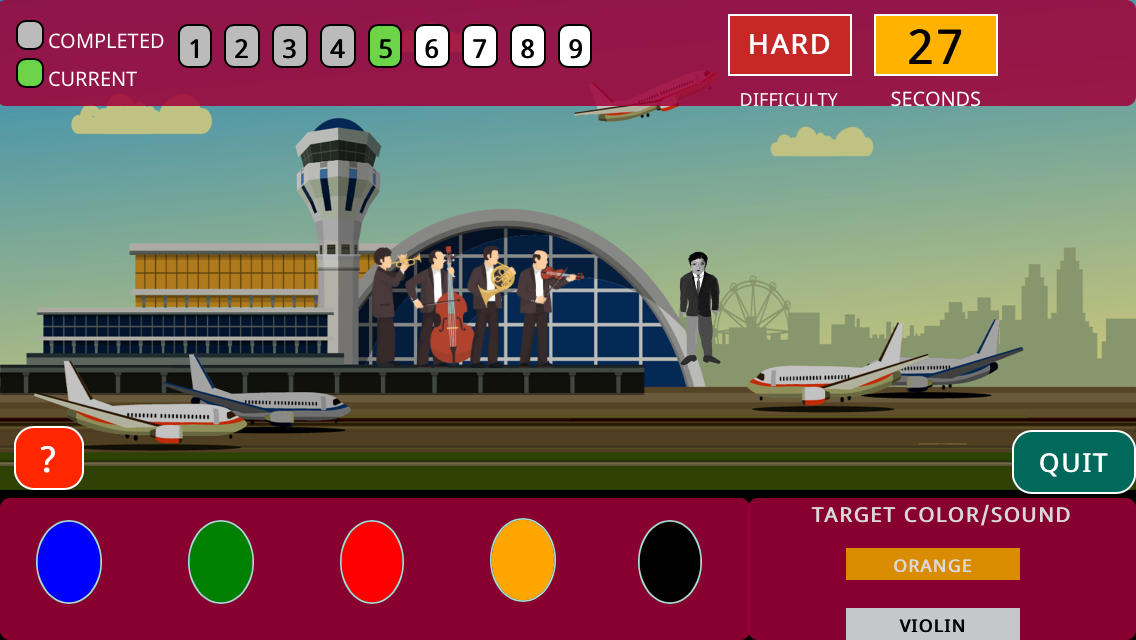 This game, featuring cute, odd, and maybe we should just say weird aliens.
Playing it strengthens your pattern matching, reaction time and short term memory.
Yet another original game concept developed in our secret game laboratories in Vancouver, BC, Canada.

Tap on the flying alien that matches the alien at the bottom of the screen while it is visible.
Avoid touching wrong aliens, as that results in a penalty of 10 points. UFOs are even more perilous at minus 30 points.
Between levels, there is a mini-game for more bonus points, because who doesn’t like mini-games?!

Go, Team Earth!
Try to set the high score, and save the world from the comfort of your armchair.
You got this, Supreme Commander, Planet Earth! 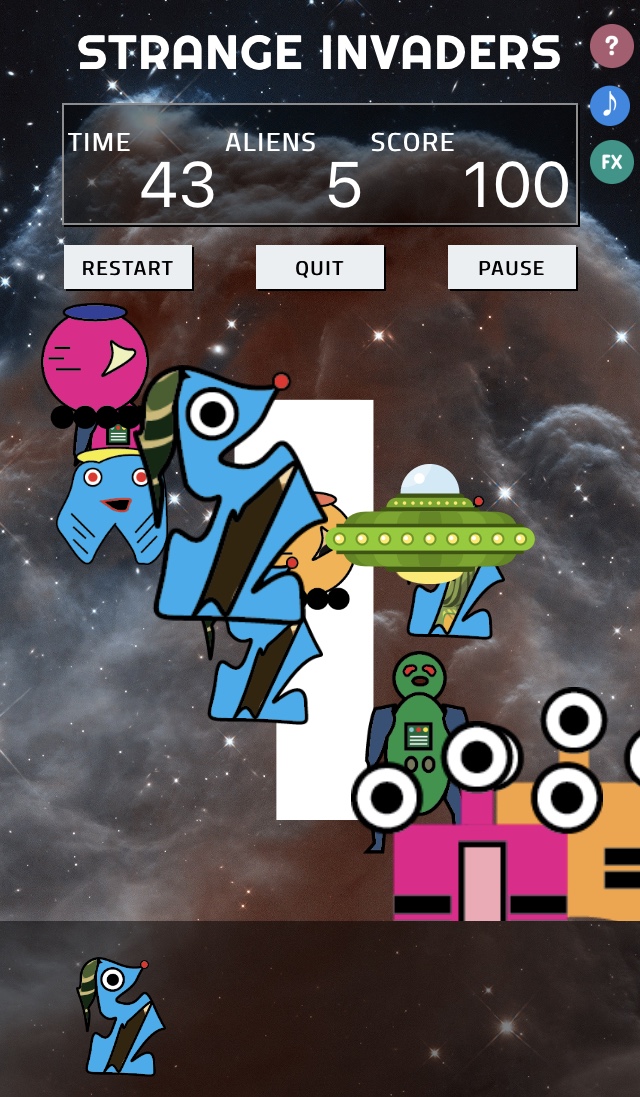 Can you guess what the scrambled picture is? That’s the basis of this highly unusual game.

You have to pick the right answer from a list of eight clues. Answer correctly, and the picture is added to your collection. There are 15 pictures, one for each category, in the free version, and a total of 200 distinct pictures if you make an in-app purchase of the expansion pack.

If you like puzzles, and have a gift for recognizing pictures cut up into 64 pieces and jumbled, Mystery Picture is the game for you.
Each picture can usually be solved in less than a minute, and the pieces are always randomly shuffled, so even with the free version, you will have hours of fun!

Spooked by the loud voices of humans, the aliens scatter and tumble, using their color camouflage in a desperate attempt to blend into their surroundings. Alas, the humans have called upon you to capture all the trembling aliens, and add each one to your collection.

In Get Aligned, take note of the alien in the center of the group. In particular, note the alien color, its background color and which of the four cardinal directions it is facing. If you succeed in getting the other four aliens to exactly mimic the one in the center, you receive that alien for your collection. Collect them all, and save the human race!

You have two weapons, each of which can be in one of two modes. The rotational beam rotates an alien (left and right modes available) and the chromatic laser changes the alien color or background color, depending on the mode. Tap on the two buttons at the bottom of the screen to set the currently operational weapon (you can only use one at a time). Tap again to change the mode of that weapon.

Once the mode is set, tap on the alien you are targeting and your selected weapon will take effect. You start with ammunition of five pulses for each weapon, but one pulse is added to the rotational beam, and two pulses are added to the chromatic laser both weapons every five seconds. Don’t forget to keep an eye on the timer, though!

Collection: When you win a round, you capture that alien and it is added to your collection. You can view your collection at any time, using the menu. In the free game, you can collect five types of aliens in six colors, and you can complete two categories. However, in the paid version, there are 30 types of aliens in six colors, for a total of 180 aliens across 15 categories! 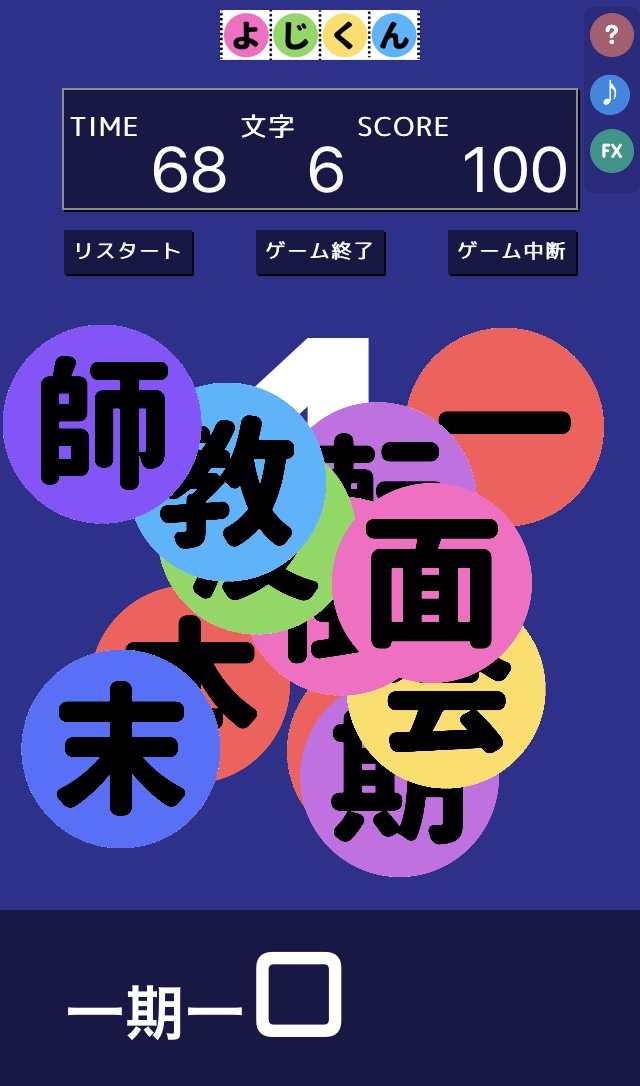 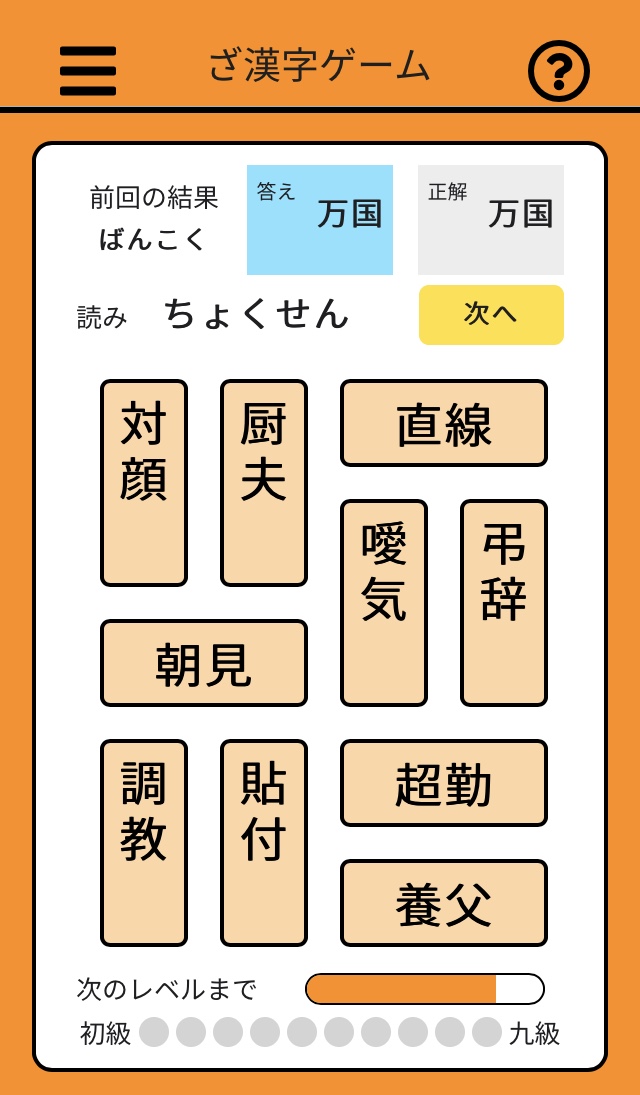